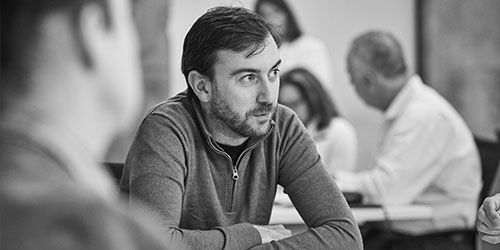 Dale Carnegie Training was founded on one man’s belief in the power of personal growth and development. That power has taken on a ripple effect for generations, transforming countless relationships, businesses and communities.

Motivated entrepreneurs who are looking to break away from the typical 9 to 5 career will find Dale Carnegie Training a sound choice with its business-to-business model, instant customer base and tailored approach. Here are a few more reasons why now is a perfect time to leave behind the typical 9 to 5 and join the team as a Dale Carnegie franchise partner.

​Dale Carnegie has helped thousands of organizations and millions of individuals take command of their businesses, careers and futures. When franchise partners join the Dale Carnegie team, they’re taking on more than a job – they become part of a mission to ensure people make their mark on the world. In turn, franchise partners are fulfilling their own goals in pursuing entrepreneurship, backed by the support of an award-winning franchisor.

​Find a culture of support

​Join a legacy of excellence