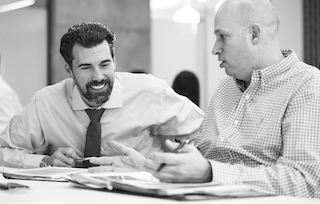 BURNABY, B.C. – Dale Carnegie, the company that set the standard in transformative professional leadership training for individuals and organizations, announced today a new franchise partner group has purchased the British Columbia territory of the franchise.

The MacAngus family will move forward with creating an even stronger presence in Canada to support the company’s core mission of helping to solve the biggest human relation challenges facing individuals, businesses and communities today.

“As a franchise partner, selling a territory is big decision, and our priority is to make sure franchise partners like Paul find the right entrepreneurs to purchase a territory,” said John Covilli, Senior Vice President of Franchising at Dale Carnegie. “Our support team prides ourselves on going above and beyond to facilitate the resale process, and that new and proven franchise partners like David, Erin and Michael can hit the ground running from day one. We’re confident David, Erin and Michael will continue to provide transformational development and leadership training to even more people and local businesses throughout Canada in the years to come.”

Founded on Dale Carnegie’s groundbreaking principles for achieving success through human relations, both in work and in life, the territory resale in British Columbia is part of a five-year growth strategy for the brand, centered on positioning existing profitable territories and operations for resale in North America.

Through a diverse training curriculum offered in-person or live online, Dale Carnegie continues to adapt to the ever-changing needs and challenges of the modern business world. Though the form of the delivery may evolve, the timeless insights and guidance brought to Dale Carnegie customers every day is still rooted in the continuity of core human motivations.

“At the foundation of our services is the belief that every person possesses inherent greatness. This belief allows us to tackle critical human relations and communications issues facing all levels of society with impactful, transformational training,” said Jean-Louis Van Doorne, Chief Franchise Advocate at Dale Carnegie. “Our franchise partners are an integral part of this mission, and as we select new entrepreneurs to join our system, they will become part of the reason why we remain the leading business leadership training organization in the world.”

Individuals and organizations return to Dale Carnegie training because its impact is long lasting. Franchise partners can leverage curriculum and training tools that target successful behavioral and emotional connections that result in lasting transformation. By changing people, Dale Carnegie believes therein lies the power to change corporations and communities.

Ideal Dale Carnegie franchise partners have experience owning a business and are familiar with internal systems and processes, as well as leading and building teams that drive sales. Individuals ideally have experience owning and operating a complementary business in industries such as consulting, HR, recruitment, staffing and technical training. Dale Carnegie requires franchise partners have a minimum net worth of $500,000 and at least $150,000 in liquid capital, depending on the size and location of the territory. The start-up cost to open a Dale Carnegie business varies depending on individual revenue targets of a territory, but it is on average 20% lower than the investment for other businesses in the industry.

Dale Carnegie helps people from all walks of life become fearless, giving leaders, instilling in them the confidence they need to get the most out of life and work. Headquartered in Hauppauge, New York, Dale Carnegie is represented in all 50 of the United States and over 90 countries. More than 2,700 trainers present Dale Carnegie programs in 30 languages every day. For over 100 years, Dale Carnegie has helped communities all over the world prosper by improving the personal and financial well-being of the people who live there, and the companies that do business there. Today, we continue to cross borders and generations, showing people how to tap into the best parts of themselves to create positive change. Over 8 million people worldwide have attended Dale Carnegie training courses.